You are here: Home / Archives for Brand / Hoover

Murray Spangler was a struggling inventor at the turn of the 20th century.  To help make ends meet, he took a Janitor job in a department store, but the primitive vacuum cleaners he used to clean the masses of carpet chucked out as much dirt and dust as they removed meaning a very unhealthy environment to work in.  Being an asthma sufferer, Murray put on his inventors cap.

He was determined to improve the design and the functioning of his vacuum cleaner.  Using a pillow case to catch the dirt, plus a number of innovations like a suction fan, Murray soon had his first prototype “Suction Sweeper” which was probably the first upright vacuum cleaner.  In 1908, Murray got the patent for his new sweeper.

Spangler ended up selling one of his sweepers to a cousin, Susan Hoover, whose husband W. H. Hoover became interested after glowing reports from his wife.  W. H. Hoover ended up buying the patent from Spangler in 1908, and he kept Spangler on the payroll to help design more suction sweepers.

Initially, there wasn’t much interest in the new upright vacuum cleaners, but Hoover had a master plan.  He offered free 10 day trials of his machines to anyone who wanted on.  It really helped kick off sales.

By 1926, Hoover’s research and development department had perfected the “beater bar”, and it was introduced in the 543 & 700 models.  The beater bar was an innovation (that became “Positive Agitation”) that tapped the carpet to help dislodge dirt and dust.

Hoover introduced a number of innovations in his vacuum cleaners, including disposable paper bags, and a headlamp which Hoover called the “Hoover Hedlite” which lit up the carpet in front of the cleaner.  This was especially welcome in dark corridors and darkened rooms.

Another fine addition to the Hoover vacuums, was the self-propelling mechanism which evolved into the Powerdrive system to help move these heavy machines around the floor for you.

Today, Hoover is a world-known brand that has become synonymous with the term vacuum cleaner.    They produce a wide range of cleaners for all types of floor.  These include Hoover Upright cleaners, canister vacuums, hard floor cleaners and more.

You can read about some of the more popular Hoover vacuum cleaners below in out review section. 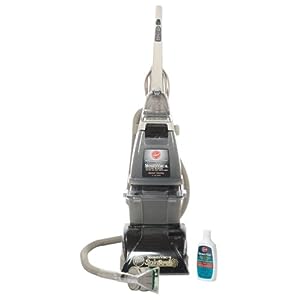 Hoover built the SteamVac Spin Scrub TurboPower carpet cleaner to offer an economical, yet functional, option to consumers. The unit manages 12 AMPs of power that move five rotating brushes that offer a deep down clean on almost any type of carpeting. The SteamVac Spin Scrub is equipped with two separate water tanks and a quick release latch to remove them for water refills and emptying. The easy use latch is a great design choice that can reduce the amount of time needed to prep the machine for another run.

Hoover backs its SteamVac Spin Scrub carpet cleaner with a one year limited warranty. The Clean Surge and direct heat features help remove stains in heavily trafficked areas in the home. A Spin Scrub powered hand tool is included to make cleaning stairs and upholstery much easier without lifting the entire carpet cleaner.

The SteamVac Spin Scrub carpet cleaner can handle three vital steps to remove stains and floor debris. First it applies hot water and cleaning solution to soak stains, then it scrubs carpet fibers and finally rinses with clean water. The SteamVac Spin Scrub takes hot air generated by the motor and blows it onto carpeting to add an element of heat to the cleaning process. It does not heat the water in the tank, but this design is a step up from carpet cleaners that offer no heating function at all.

What did customers who bought Hoover’s SteamVac Spin Scrub TurboPower carpet cleaner like?

If has a number of great features including:

Customers who reviewed the Hoover S3765-040 WindTunnel bagless canister vacuum cleaner on Amazon awarded this cleaner an average of 4 out of 5 stars.

The Hoover Platinum Collection Linx Cordless stick is a little more expensive than some stick vacuum cleaners. However, the unit looks fantastic, and performance is good as well. Being cordless, the Hoover LINZ Stick Vac gives you the convenience of portability with the performance of an upright vacuum cleaner.

On top of that, the Platinum Collection Linx comes with WindTunnel technology (three suction channels), so you know you are going to have a powerful suction, even though its cordless. Speaking of which, the Stick uses an interchangeable 18 volt lithium ion battery, and there is a handy battery “fuel gauge” on the Stick.

So, on paper this Stick looks the business, however, the real proof is in the use, so let’s see what reviewers on Amazon thought of this machine.

From the 93 customer reviews on Amazon (at the time of writing this), 60% of reviewers awarded it a maximum 5 out of 5. The average rating of all reviewers is somewhere between 4 and 5 out of 5.

It’s ideal for quickly cleaning bare floors or low carpets. The S2200 Flair has a multi-stage filtration system, and an easy to remove dirt cup.

This model has a 20 foot power cord.

The Hoover Flair Stick Cleaner is a very slim unit, and has a 6 amp motor. The 10 inch cleaning path means you can cover the floor area quickly, and the dirt is deposited in a bagless dirt bin that can pop off easily to empty.

The Hoover Flair Stick has a washable cloth filter as well as a side-mounted filter that cleans the exhaust air.

There is also a switch to go from bare floors to carpets.

For a quiet, effective Stick vacuum, the Hoover S2200 may be a good option. Let’s have a look and see what S2200 users have to say about this Stick cleaner.

On Amazon, there have been 87 reviews of this stick. The average is between 3 and 4 stars out of 5.

The Hoover Steam Vac with clean surge is a vacuum cleaner with a difference. Imagine being able to steam clean your own carpets, upholstery and bare floor boards?

Features of the Hoover SteamVac include:

There is a convenient trigger on the handle of the SteamVac that releases the cleaning fluid. Once you have finished cleaning your carpets, you release the trigger and the Hoover SteamVac pushes hot air.

The Hoover SteamVac is a very popular floor cleaner although calling it a Steam Vac is a bit misleading. On Amazon over 1000 people have reviewed this machine, awarding it an average of over 4 out of 5. 67% of those who wrote a review awarded the Steam Vac 5 out of 5, and overall the machine averaged well over 4 out of 5.

Reviewers liked the following on the Hoover SteamVac:

The Hoover U5140-900 Tempo Widepath is an upright vacuum cleaner that uses a bag.

The cleaning path is 15 inches wide which means you cover the area more quickly and get your hose cleaned sooner.

Hoover have put an allergen filtration system into this vacuum cleaner so that the air it sucks in is filtered before it is pumped back out of the machine. The filtration system removes 100% of dust mites and 99.9% ragweed and grass pollen, meaning those who suffer from asthma or allergy will have cleaner air to breathe after you vacuum your house.

The Hoover U5140-900 Tempo has a powerful 12 amp motor which creates fantastic suction.

The Hoover Widepath Tempo also has a useful headlight so you can see the area in front of the vacuum.

The attachments store on the machine itself, so there’s no more hunting around (as long as you put them back once you have finished with them) for the attachements when you come to a tricky part of your carpet. The tools include:

This is one of the most popular Hoover vacuum cleaners, and the reviews on Amazon are largely favourable. With 1582 customer reviews (at the time of writing this), over 54% of people gave it a 5 out of 5. The average score for the Hoover Tempo Widepath is over 4 out of 5.

Carpet cleaners like the Hoover F7411-900 SteamVac are designed to give your flooring a good deep clean with carpet detergent like the Hoover 40321128 Deep Cleansing Carpet 7 Upholstery detergent. They work by applying hot water and detergent to the carpets, and scrubbing the carpets with a rotating brush. Hot air is then forced into the carpet so that the brushes and cleaning solution can do their job efficiently.

The cleaner has a number of features, including:

The Hoover Steamvac Dual V Widepath has received a number of reviews on Amazon. With 108 reviewers of this machine, the average rating is between 4 and 5 out of 5, with over 77% of customers awarding it a 5 out of 5.

The Hoover 5507-900 Elite is an upright bagless vacuum cleaner from Hoover. The powerful 12 amp motor provides plenty of suction and the included crevice wand, dusting brush & upholstery tool and pet hair tool will have your carpets and upholstery dirt and dust free in no time.

The Hoover 5507-900 Elite includes a headlight to see where you are cleaning plus a number of other features including:

Overall, users of this vacuum who reviewed it on Amazon liked it. With an average of 4 out of 5 based on 547 reviews, here are some of the features users liked on the Hoover 5507-900 Elite Auto-Rewind Bagless Upright vacuum cleaner:

The Hover WindTunnel Cyclonic vacuum UH70035B is an upright vacuum cleaner with Hoover’s patented WindTunnel technology. The WindTunnel uses three distinct air tunnels that help lift and remove dirt from the carpets. This technology stops the dirt from dispersing back into the air and onto the carpets again during cleaning.

This vacuum comes with a flex hose extension for reaching above floor areas.

The convenience of a bagless vacuum cleaner is complimented by its easy to empty dust cup & the HEPA filtration which removes up to 99.9% of allergens from the air passing through the vacuum as it cleans.

The UH70035B is a multi-surface vacuum that can be used on carpets and hard floor surfaces.

Reviewers on Amazon were not totally convinced with this vacuum cleaner. There’s no denying it looks great, but users had the following complaints:

However, on a positive note, users did think that the UH70035B Windtunnel:

The Hoover U5269-900 EmPower bagless upright vacuum cleaner is another Hoover vacuum that uses the patented WindTunnel technology for exceptional suction and cleaning power. Many people prefer bagless vacuum cleaners these days, so this might be a better option than, e.g. the Hoover U6485900 Windtunnel Anniversary Self-Propelled Bagged Upright Vacuum Cleaner, although that model is self-propelled and this one is not.

The Hoover U5269-900 EmPower has a number of great features including:

What are people saying about the Hoover EmPower Bagless Upright Cleaner?

Out of 61 review on Amazon, this cleaner averages around 4 out of 5, with more than 50% of reviewers awarding it the full 5 out of 5.
What Hoover EmPower Bagless Vacuum Cleaner Owners liked:

The Hoover U6485900 Windtunnel Anniversary vacuum cleaner is an upright vacuum that uses the patented WindTunnel technology.

This vacuum uses a bag to collect the dirt and dust and includes some innovative features like:

What are people saying about the U6485900 Windtunnel Anniversary Self-Propelled Bagged Upright Vacuum Cleaner?

At Amazon, 37 people had reviewed this vacuum cleaner (at the time of writing this). The average rating was around 4 out of 5, with the majority of people awarding this cleaner with a 5.

See our top 5 recommendations on vacuums under $100